December only: use promo code RUSTY20-1222 to save 20% off Rusty the Robot, Quack the Duck, and Clarence the Dragon products! Shop now. 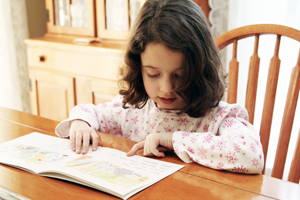 Maddie has had about 24 lessons with me now. During each lesson, we read two or three familiar books. My focus is on getting her to read faster (she continues to read quite slowly), and with more expression and intonation. During each lesson I see improvement. Next she reads to me a book she read for the first time the day before. I take a running record—an assessment tool used to record her errors and self-corrections. Maddie usually reads these books with 97% or better accuracy. I am pleased because I think students learn more when a book is on the easier side. I have started doing some work in each lesson with magnetic letters. In my next blog, I will show some of these sessions. In every lesson we write a story and then cut up a sentence. Maddie is learning a lot from writing that carries over to her reading. The last thing we do is read a new book. I introduce her to the story and then she reads with some support from me.

Reading on her own

A large shift that has occurred is in Maddie’s attitude towards reading. Previously, Maddie had avoided reading. When asked to read she was very hesitant and resistant. But just the other day, on her own, Maddie pulled some books off her bookshelf in her room and began to read them to her sister.

In this clip, you can listen to Maddie read a bit of A Hungry Lion. This is the second time Maddie has read the book and I think she reads it quite well. Listen and see if you agree. She reads it with a 99% accuracy rate, stopping only on the word did.

A Hungry Lion features a play at the end based on the story in the book. I told Maddie that she could now read the play to her family. The day after the lesson her mom called to tell me that not only had Maddie read the play she had taken the book up to her room after the lesson and set up a puppet show. She made tickets and invited her mom, dad, and sister Vivi. Maddie drafted her dolls and stuffed animals to play the parts. Her mom made a video of the show if you would like to see it.

What I am pleased to see is Maddie attempting to use different voices for the different characters. Clearly a new literate world is opening up for her!

Michèle Dufresne is author of many Pioneer Valley Books  early readers (including the Bella and Rosie series), Word Solvers (Heinemann), and an early literacy and literacy intervention consultant.